Last year, I worked on a marketing campaign to promote Manufacturing Day, which is an annual occasion in October when manufacturers across the United States open their doors and show people in their communities what modern manufacturing really looks like. This year (2014), Manufacturing Day falls on October 3.

One of the key projects for the 2013 campaign was a new website. As I started discussing how to approach the new site with my colleagues at Industrial Strength Marketing, we quickly came to the conclusion that the Manufacturing Day website needed to be responsive. This was no surprise since “mobile first” has been a popular mantra repeated by nearly everyone in the digital marketing space over the last few years. But what is interesting, and what I think might provide some nuance to the discussions about responsive design that continue on the Web, is why we chose to do so.

The first reason had to do with our three principal audiences for MfgDay.com: sponsors, hosts, and participants. The second was the lifecycle we envisioned for the site. Since we were designing the website as a tool to attract sponsors, book events, and then ultimately drive participants to the events, our three distinct audiences would all primarily interact with the site during three separate timeframes. We anticipated that each of these audiences and their respective contexts would favor different devices, which made a site capable of performing in mobile, tablet, and desktop environments an absolute necessity.

The first phase of the Manufacturing Day campaign was devoted to finding partners that could help produce and promote the national event. From May through July, 2013, the site needed to function like a corporate website, explaining what Manufacturing Day is, what institutions are affiliated with it, the scope of the movement, and reasons to sponsor.

Next, from June through September, we decided to focus on encouraging manufacturers across the country to participate in Manufacturing Day by planning open houses and other events that were to take place on our target date of the first Friday in October (October 4 in 2013). The website needed to function as the central hub where hosts could register their events, receive updates, and access tools that will help them succeed at being a part of Manufacturing Day, such as a social media playbook and a host toolkit.

Lastly, from August up until Manufacturing Day in October, the website would have to shift its audience emphasis again and serve attendees, providing them with a central resource to find events in their areas.

To better define our first audience — potential partners and sponsors — we decided to focus on an executive class of users, predominantly from marketing departments at major corporations. Statistics show that smartphones are ever-present with this group and a 2013 Decision Dynamics/Financial Times study reports that 49 percent of executives are now using tablets to replace their laptops. Improving our chances of communicating with this group required a mobile- and tablet-ready site. 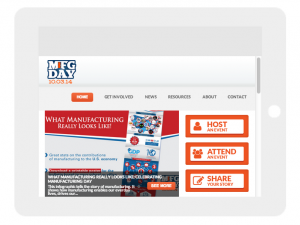 During the second phase, manufacturers, which typically use tried-and-true desktop and laptop computers to go online, would need a site that rendered properly in a PC web browser. Since Manufacturing Day would be nothing without manufacturers, MfgDay.com definitely needed to perform as a traditional website.

For the turnout phase of the site, we concluded that we would need an accommodating mobile presence. At that point in the timeline, MfgDay.com would be working for community members and students, with a heavy emphasis on local initiatives. The heavy student focus, coupled with the local emphasis, made a mobile-ready site an absolute necessity (according to a Microsoft.com study, fully one half of all local searches in 2011 occurred on mobile devices, with a steep increase projected for all mobile web statistics through 2014).

Manufacturing Day 2013 was a resounding success. Our primary campaign goals were to create 500 events in 50 states with 20,000 attendees. We delivered 834 events in the 48 contiguous United States plus two Canadian provinces and Puerto Rico. While not all events reported attendance, statistical modeling based on documented event attendance projects that anywhere between 35,000 and 65,000 people attended Manufacturing Day events across North America. Through sponsorships, we raised $95,000 in cash and in-kind donations.

As the hub where all of our audiences got information and participated in Manufacturing Day online, the responsive website played a big part in all of these successes, performing mainly as predicted. Of the 75,035 visits that occurred between May and October of 2013, 79.12% were from desktops and laptops, 5.34% were from tablets, and 15.54% were from smartphones. While tablet traffic hovered at around 5.5% throughout the campaign, our projections that desktop traffic would lessen proportionately and mobile traffic would increase as the event approached were accurate. Desktop reached a high of 89.09% of total site traffic in July and then dipped to 76.23% by the event date. Meanwhile, smartphone traffic grew from 7.81% to 18.03% of overall traffic in October. 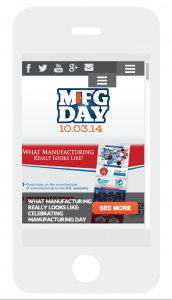 What Manufacturing Day Teaches Us about Responsive Design

The Manufacturing Day project led me to two conclusions that I plan to keep in mind when working on any web development project. The first is that a responsive design approach needs to be chosen for a reason, which means it needs to respond to the specific needs of a project. The second is that we need to think more deliberately about websites as communications portals that evolve over time — not just because we update them with regular content, but because different groups of people visit them at different times.

In the case of MfgDay.com, a responsive website was the right way to go as it provided the flexibility for a single site to perform in three different viewing environments for three different audiences. In other words, for Manufacturing Day, responsive design was user-based design and supported the overall campaign strategy and timeline. Any website that’s engineered “mobile first” and uses a responsive framework that isn’t grounded in a similar thought process rests on the alibi of generic statistics about mobile web viewing and misses out on playing a true strategic role.

And while MfgDay.com is squarely an event site, it can be a general lesson in how website audiences are not just varied, but exhibit variability over time. We can’t just think about absolute statistics such as “Group A is 70 percent of our audience; Group B is 20 percent; Group C is 10 percent.” It may be that these ratios fluctuate, according to the ebbs and flows of sales cycles, holiday shopping, or seasonal events. Creating a site that acknowledges this and provides a technical framework that can respond to it is crucial.

The Manufacturing Day website we created in 2013 is still in action, with a few enhancements for this year. So please take a look at MfgDay.com and leave a comment to let me know what you think. And, if you wouldn’t mind, tell me a bit about which audience you consider yourself to be a part of and which device you used to view the site.

On the other hand, if you’re curious to know more about responsive design and some of their inherent strategic values of a responsive website, I encourage you to check out this fun primer on the subject, “Don’t Make Me Zoom.”

Editor’s Note: This article was originally published in July 2013 and has been updated for accuracy and to include details about the success of Manufacturing Day 2013.

Jake Gerli is Content and Communications Strategist at Industrial Strength Marketing in Nashville, Tenn. He has also worked extensively as a book editor and taught writing at the University of California, Berkeley. He lives in Petaluma, Ca., home of the Lagunitas Brewing Company.