Sometimes it’s difficult to keep up with what’s going on in the world of digital marketing. It gets even more difficult when you try to focus on multiple channels within multiple industries, such as industrial B2B (business-2-business).

Well, luckily for you, I just happen to keep my finger on the pulse of those issues so you don’t have to. Below you’ll find some of the most interesting technology and trends that you need to know about for Q3 of 2014.

Google Panda 4.0 Update — Announced on May 20, 2014, Google is rolling out a new version of one of its most impactful algorithmic updates in recent history (the Panda update of 2011). Google’s Panda update was focused on weeding out what Google deemed as “low-quality search results,” making the content marketing boom truly gain momentum and become a vital part of any digital marketing plan.

When Panda was initially released, a number of sites saw decreases in organic traffic and it has been updated regularly since its launch in early 2011. This particular “point-oh” update indicates its significance and Google says that this update specifically impacts how Panda will identify SEO site elements and may affect around 7.5 percent of sites worldwide.

Those using all above-board, “white hat” SEO tactics don’t really have anything to worry about, but any site or company attempting to “skirt the edges” of SEO may see a drop in traffic. Be on your guard over the next few weeks and be sure to check with your SEO consultant or agency to make sure they are on top of the update and have modified their strategy accordingly.

Net Neutrality — Admittedly, the topic of “net neutrality” and the legal ramifications of the topic (political and otherwise) are beyond the scope and purpose of this post and blog, but progress announced in early May of this year requires that we touch on it and give a bit of an explanation for those not familiar with the concept. 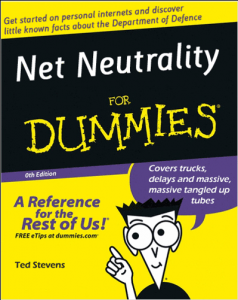 A mock cover for a book many may wish to read. Created by Joeri Poesen.

In the simplest of definitions (this one taken from Wikipedia), net neutrality is:

the principle that Internet service providers (ISPs) and governments should treat all data on the Internet equally, not discriminating or charging differently by user, content, site, platform, application, type of attached equipment, and modes of communication.

On May 15, 2014, the U.S Federal Communications Commission (FCC) moved forward with a proposal intended to safeguard and protect net neutrality. Currently, there are no laws that prevent ISPs from blocking whatever content they choose. In the simplest of terms, the FCC’s net neutrality proposal won’t change a whole lot, but it brings discriminatory practices by ISPs under harsher scrutiny. Basically, it allows Comcast or AT&T (or other ISPs) the ability to create “fast lanes” of streaming speed for companies that are willing to pay a little bit more, but those lanes have to be closely monitored by the government so small companies aren’t discriminated against.

What this means for Internet users and companies that rely on the Internet for business is . . . nothing much, right now. At present, this is merely a proposal that is open for comment on the FCC’s website.

For the time being, it’s best just to be aware of what is going on in case the FCC decides to take harsher actions with ISPs in the future (or reclassify their business standings for greater government control). Right now, unless you work for HBO Go, Netflix, or another company whose future depends on Internet streaming speeds, you can rest easy.

Mobile-Friendly Websites — By now, the fact that mobile-friendly websites are important should be no surprise. Most of us use smartphones to view websites more and more each year. According to eMarketer, 69.4 percent of the global population will use a mobile phone by 2017. And as of last year, global mobile traffic accounts for 15 percent of ALL Internet traffic (KPCB Internet Trends 2013).

I’d wager that if you checked out the website analytics for your own site and compared mobile traffic rates from this year to last year’s, you’d see a steady increase as well. With more and more people using mobile phones and more of those people visiting your website, 2014 may be the year to explore mobile-friendly options for your site if you haven’t already. 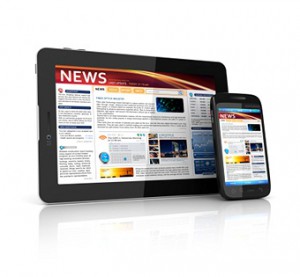 Mobile website viewing, which encompasses both smartphones and tablets, continues to rise.

If you want to find out more information about the benefits and opportunities made possible with a mobile-friendly site, we encourage you to download “Don’t Make Me Zoom,” a primer on responsive websites — the most prevalent and cost-effective approach to mobile-ready website development.

There are new digital marketing technologies, tools, and trends emerging every day. We hope this quarterly column will help you stay on top of them and point you in the right directions. If you have any tech, tools, or trends you would like us to cover in future editions of the Industrial Digital Marketing Roundup, please email them to us at social@marketstrong.com with the subject “Industrial Digital Marketing Roundup,” or contact us directly.